I am a big pet advocate and a real softie for all fur-babies, especially those in need of rescue.  My Facebook feed is filled with shelter posts.  It seems like we have always had pets, particularly dogs, in our lives.  Sometimes our pack included our children’s dogs who lived with us temporarily.

My husband, Jerry, is the ultimate caregiver.  If he knows, or even thinks, a dog has a health or comfort issue, Jerry is checking out the dog, pouring through books, and on the computer researching the best solution.  He gets teased from time to time about going overboard, but no one takes better care of his/her fur-baby.

In August, we had to help our dog Janey cross the Rainbow Bridge.  I say our dog; but, really, Janey was a one person dog.  She was a black chow.  Chows are notorious for being one person dogs, and Jerry was that person.  He rescued her when she was four, and she crossed the bridge when she was 18!

We had discussed taking a year before we brought another dog into our lives.  Caring for a senior dog is very time consuming and not for the faint of heart.  Sad as we were to lose her we could now travel and even be gone all day without worrying how she was or checking in to take her to the bathroom every three hours.  We actually took our first vacation together in years!

You may remember my tribute to the volunteers at the local animal shelter that appeared in my November newsletter.  Back in September, I had helped to set up a booth at the local Tractor Supply for the pet appreciation day which included pets from the Steuben County Humane Society.  I loved interacting with the dogs and volunteers and even used some of our oils to help settle the excited ones and give courage to the timid ones.  I asked how the dogs were chosen for the adoption day event.  Did they select the oldest dogs?  Were these the dogs who had been at the shelter the longest?

(Jerry and I had discussed going to a local shelter, when it was time, and asking to see the dog who had been there the longest.)

One of the volunteers brought out a binder with pictures of all the dogs.  She took me to the pages of those who had been at the shelter the longest time, and lo and behold, there he was!  It was TEX!  There was an instant connection!  How did a dog in NE Indiana get named Tex?  This transplanted Texan had her heart stolen!

I took a picture of his bio in the binder and showed it to Jerry.  It was much too soon for him to consider another dog.  From time to time we would wonder about Tex.

We took our vacation to Louisiana and Texas to visit family and friends.  It was wonderful to get away together and be free to go where we wanted when we wanted to go.  No pet responsibilities.  I think coming home to the empty house, though, may have helped us both realize that Janey left a giant hole that needed to be filled.

I called the shelter.  He was still available!

Last Thursday night we headed to the shelter with our adoption application in hand.  We told them we were there to apply for adoption.  They asked if we had a particular dog in mind, and we named Tex.  The volunteer brought him out to the small yard, so we could see him up close and interact with him.  He figured it was just another day in the yard.  It seems there had been others to show an interest in him, but, sadly, no one adopted him.

He barely noticed us as he ran the yard marking his territory and only occasionally returning for a quick pet, but for us it was love at first sight.  His gangly body with too many ribs showing and his gnarly, scarred head drew our hearts to him.  But those eyes!  When he looked at us with those sad “I wish I had a fur-ever family” eyes, we were committed to take him home with us. 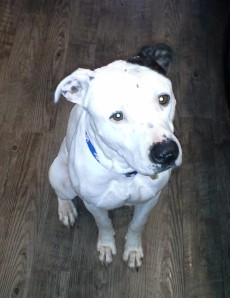 It is appropriate for Tex to make his official debut on Veteran’s Day.  While Tex was a volunteer-favorite at the shelter (he had been there since July of 2013), he had a special volunteer who loved him.  Travis, a returning soldier who experienced hard days from time to time, would come to the shelter and literally crawl into the cage with Tex.  There the two of them would sit as Travis wrote in his journal and Tex loved him unconditionally until the hard time passed.

We definitely have some more training to do, and we need to fill out those ribs.  But he is the sweetest, gentlest, companion anyone could ever have.  He will appear on this blog from time to time.  He loves to help me work and would be sitting in my lap right now – all 51 lbs of him, if I would let him.  He will also be a “featured writer” in the Newsletters.  The “Paws for Pets” section is being renamed “Tips from Tex”, and he couldn’t be more excited!

So from our family, and especially Tex, we say a big thank you to all who have served, are serving now, or are the wives, children, husbands, mothers, fathers, and other family members of a veteran.  You are appreciated and loved, and you, your service, and your sacrifices will never be forgotten!